Hi,
The subject of improving the Capri's night-time illumination of the dashboard instruments comes up regularly on this forum. I, like a lot of others, suffer from this problem so I thought I would post a quick guide on how to improve the situation.
First off, remove the instrument binnacle from the dashboard. Detailed instructions for this procedure are printed in the Haynes manual and don't need to be repeated here.

Remove the clear cover by removing the seven screws.

Then a further two screws to take off the black surround.

You'll be left with this. The locations and function of each bulb is as shown.

The actual gauges are removed from the rear. This is the speedo. As you can see, the electrical circuitry on the back has been repaired in places, but it all works fine so I'm not worried about that.

This is where a real improvement can be made. Remove the blue light covers by gently pulling back the plastic tabs. Don't forget that we're dealing with thirty year old plastics here, so treat everything with kid gloves!

Repeat the above process for all four blue covers and you will definitely see a real difference once everything is re-assembled.

Choose between green coloured LEDs or 3W wedge light bulbs. My preference was to use the bulbs, so I could still use the dimmer in the unlikely event that the illumination was too bright! However, these bulbs gave a light green/yellow light which I didn't like so I fitted the LEDs instead. The casing of these LEDs were too large to fit through the holes provided in the instrument housing, that's why the flange has been trimmed off from just below the transparent part. The LEDs are on the left of the photo, the bulbs in the centre and the bulb/LED carrier on the right. The warning lamps can be replaced with LED as well, should you choose, with the exception of the indicator flasher, which must remain as a standard bulb. I used coloured LEDs for these warning lamps although that is not strictly necessary as there are coloured filters in the fascia. One important point to note about LEDs is that, unlike bulbs, the current can only flow through them in a certain direction. If you fit them and they do not illuminate, you have to remove the casing and LED, rotate them through 180 degrees and re-insert them.

Now, you're expecting to see a photo of the illumination working aren't you?
Well, you'll have to wait because I wanted to go one step further, as is the peers.dupp way!
I bought two A4 sheets of this self adhesive chrome card.

I cut it to shape and lined the inside of the housing, carefully ensuring that it does not come into contact with any electrical connections. The intention of the chrome card is to reflect the light to where it is needed instead of it being absorbed by the plastic. This is a photo of the operation in progress.

Then it's just a case of re-assembling everything and trying it out.
It works really well, and now the illumination is almost to the standards of a modern car. But you'll have to take my word for it, as it was impossible to take a decent photo with the equipment I've got.

This is the best I can do, but it looks much better in the flesh.

Job done!
I hope that this guide may be of some use to somebody suffering from the same lack of illumination.
Andrew.
Last edited by Andrew 2.8i on Sat Dec 13, 2014 6:00 pm, edited 5 times in total.

Thats very good of you to post a topic like this. Been looking at improving my dash at night...because it is crap.
Top

Fantastic guide, may well do it myself some day! Just out of interest how much were the bulbs/LEDs?

I dont know about everyone else but I find the dash lights OK when there are no street lights, but struggle in 30mph areas etc. due to the lack of contrast.
Top

Joshy wrote:I dont know about everyone else but I find the dash lights OK when there are no street lights, but struggle in 30mph areas etc. due to the lack of contrast.

Hi,
Same here, mine were readable, just, at night but impossible to read in half-light at dawn or dusk.
The LEDs were bought some time ago, but I was waiting for the dash to be apart before I fitted them. They are not very expensive to buy, I think around a fiver . I will try to find the link.
Andrew.

A17 LTF wrote:Thats very good of you to post a topic like this. Been looking at improving my dash at night...because it is crap.

Agreed! It's worth doing, even if you just replace the bulbs with coloured ones or LEDs and remove the blue lenses. As I said, the effect is much better than shown in the last photo.
Andrew.

Hi,
These are the LEDs I bought.
http://m.ebay.co.uk/itm/361009034029?nav=SEARCH
Remember, you don't have to have green, you can change to any colour you like, but I'm not sure if the bulb for the clock is available in other colours to match. You can also replace the handbrake, main beam and ignition warning light bulbs with LED in their correct colours, should you wish. As stated above, the warning light for the indicators must remain as a bulb and cannot be changed to LED. This is because the current flows both ways through this circuit.
Andrew.
Last edited by Andrew 2.8i on Sat Dec 13, 2014 2:38 pm, edited 3 times in total.

As always a great guide Andrew, again I too have been meaning to do this but havnt got round to it. I will definitely be using this guide when it comes to doing it though

ThatGuy wrote:As always a great guide Andrew, again I too have been meaning to do this but havnt got round to it. I will definitely be using this guide when it comes to doing it though

Thank you, Tom. I'm pleased that you found the guide useful.

Good article, as ever Andrew. They really are a huge improvement, one of the handful of modifications which I think really improve the car.
Whilst you CAN replace the Ign light bulb, this bulb does supply an initial `excitation` current to the stator of the alternator; an LED won`t supply anything like the same current. In practice, the Alternator will self-excite once it reaches 2k & will then function absolutely normally until turned off again. Mine has been like this for a couple of years now & doesn`t worry me, - BUT I wouldn`t like to promise that EVERY alternator would self-excite so readily. With hindsight, I would probably leave the bulb as is.
The other thing, just for information purposes, is that it`s not possible to replace the flasher warning as the current flows in opposite directions depending if your signalling Right or left; LEDs are polarised (Diode) so will only work one way

NB just to clarify, once the Alt self-excites it `switches on` and stays on, running normally at ALL speeds (in case I suggested it only worked above 2k)
Top

Steve,
Thank you for clarifying these points about the bulbs and LEDs in the indicator and ignition warning lamp circuits.

stevemarl wrote:They really are a huge improvement, one of the handful of modifications which I think really improve the car.

Agreed, anyone who drives the car at dusk, night or dawn should remedy their dim dials without delay.
Andrew.

I did a similar mod to mine, just took the blue caps off and kept original bulbs, improvement is unbelievabele and dials can be seen easily at dusk and in lit up areas and can still use dimmer.
Top

Removing the blue caps is the most important part of the process, however, retaining the existing bulbs will illuminate the dials with white light. If anyone is thinking of removing the caps and wanted to keep green illumination, they will have to change the bulbs.
Andrew.

Thank you, glad you enjoyed it!
While I think of it, I'll just mention that my ammeter has never seemed to work as it should. I cleaned the contacts on the back of the gauge and hey presto! It now works. I'm so pleased that I'm getting these little annoying jobs sorted while the dashboard is apart.
Andrew.

thats a brilliant step by step easy guide on how to improve the illumination of your instrument cluster thanks peers i also have illumination problems as ive still got the original bulbs with covers on. being as it looks really easy to improve the lighting im going to make this a winter project to improve mine. im sure my speedo and rev counter lights dont work as there virtually non existent. but thee gauge lights are ok. i would like to fit the green bulbs to mine not the LED's as i want to be able to use the dimmer switch still. could you point me in the direction you found the bulbs thanks peers. 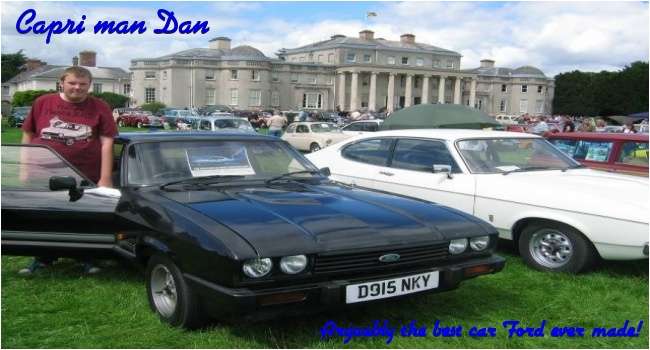 dan the capri fan wrote:could you point me in the direction you found the bulbs thanks peers.

Hi Dan,
Thanks for your comments, yes it's a nice easy project for the winter. I bought my 3W bulbs from a local car accessory shop, I can't find any online now.
If you want to take a chance on 5W bulbs, which get a bit hotter than the 3W versions, try these:
http://www.astraautomotive.co.uk/lighti ... -10mm.html
Perhaps someone can post on here if they can find a supplier of 3W green capless bulbs.
Personally, I used LED for reliability as I wasn't bothered about using the dimmer switch. After all, when does it ever get used?
Good luck with the project,
Andrew.
Last edited by Andrew 2.8i on Fri Jan 09, 2015 11:52 pm, edited 1 time in total.

thanks for looking for us peers i might go for the LED's as i dont want to get the wrong watt bulbs and burn something in the instrument cluster. i only want to use the dimmer switch as im afraid the LED's might be too bright. did you say in your guide somewhere that the LED's dont fit as well or did i miss read it thanks

dan the capri fan wrote:thanks for looking for us peers i might go for the LED's as i dont want to get the wrong watt bulbs and burn something in the instrument cluster. i only want to use the dimmer switch as im afraid the LED's might be too bright. did you say in your guide somewhere that the LED's dont fit as well or did i miss read it thanks

Dan,
The 3W LED is just about the correct brightness. I also tried 10W 5SMD LEDs but they were too bright, and as you say, they cannot be dimmed. Just a thought, you could buy the 5W bulbs and keep the dimmer off the maximum setting. That way they wouldn't get too hot. The LEDs I bought had a little flange on them which meant that they wouldn't fit in the holes in the instrument cluster, which meant that the electrical contacts on the bulb carriers couldn't make contact with the printed circuit board. A simple trimming of the flange solved that issue. While the instruments are out it's an ideal time to check the printed circuit for breaks in the circuits and repair as necessary.
Good luck,
Peers.

thanks peers i think ill go for the LED's as you said there not too bright also is that flange thing on all the bulbs or was it just an off cut.