You can RANT and RAVE to your hearts content here instead of clogging up the Q&A Technical Forum!
Report any offensive posts to [email protected]
Post Reply
23 posts

Makes one wonder what Batman & Robin get up to in the Batcave.

Steve, me and Jason were only talking about Superman being "Bi" yesterday mate. Ridiculous really. But then Jason sends me this photo Marie took of him which has caused me some concern....he has mentioned he has a special Wonder Woman outfit 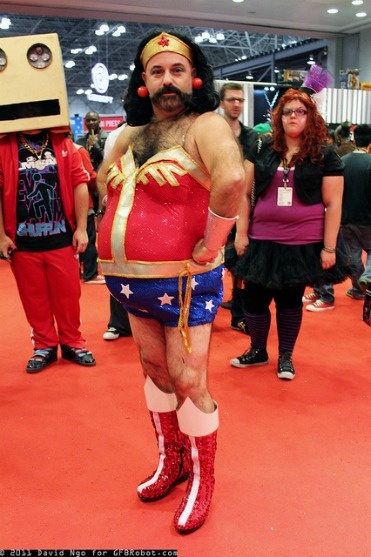 Don’t knock it till you tried it

The ASMR thing, I mean

This even made the news on Radio 2 during the week.

I can trump that Andrew, it made TV National news even, the day before Steve posted it.
Top

I can trump both Andrew and you Paul

this is just part of the general lowering of basic standards .......... how long before pedophiles and rapists are given the same acceptance and we are expected to just accept them as normal people.
I am NOT implying that Gays are next thing to rapists and pedophiles , there is a difference in that with gay peeps there is consent ( mostly )but dont tell me its normal .I have met quite a few gays and for the most part they are decent peeps . Trouble is some disorders are becoming fashionable , I think this is evidenced by ..... well nearly all the veterinarian/vegan girls I know are also gay , not so much the guys .
But turning historic fictional hero's into bi/gays is just fucking bullshit .
Sometimes I talk to myself ... and we both have a good laugh
Top

No offence Hamish, but it comes to something when you're the upholder of moral standards....

I thought superman was your uncle

Yeah , Im trying to figure out if I am wanting to maintain moral standards ,or just another old bastard who just plain doesn't like change ......into the new age . Just thinking about what my Grandparents generation thought of the Beetles,Rolling Stones ect who were the epitome of evil but turned out Ok , and then there was Jimmy Savile ,Rolf Harris ,Epstein and Andy ,who ,presumably they thought were OK and turned out to be pedo's and all round sexual predators.
How does one really know what is OK at the time, that may prove to be wrong or right later
Sometimes I talk to myself ... and we both have a good laugh
Top

UK age of consent until late 19th century was 12: presumably people then just completely accepted that as the norm (although it`s hard to believe now) Then again look at the holocaust: `normal` people manned the death camps almost within my lifetime. `There`s nowt so queer as folk.`
Inclusion and acceptance is one thing, it`s when it becomes celebration I start to feel uneasy.
Also, going out on a limb - I do NOT think celebrating `black music, black history, black culture does anything for race relations - whereas the message should be "WE`RE ALL THE SAME, REGARDLESS OF COLOUR" these exercises in wokeness just emphasise the differences - to the point of being racist! No BNP member is going to change their views because a load of footballers `take the knee` either. Education from an early age is the only answer. Full stop.
Top

Hehe, couldn't help but laugh at that one, superb Andrew!
Top

Perhaps "we're all different, but we're all equal". We've got to be inclusive, Steve.

Andrew,
Yes, I worded it very badly: I meant `we`re all human` (rather than the same), as you say, we should all be valued equally. `Emphasize the differences` was also poorly worded (and mis-spelt): I meant increase divisiveness amongst those already so inclined.
Top

Some are more equal than others don't forget. A line of pure genius that was, and so apt, throughout life.
Top