Found my way here eventually, I usually sneaked in occasionally to look for information so I thought I’d better join in.

Brief history: I had my laser for a couple of years but around the late 90s it was getting towards the end of its suitable daily driver life. It was becoming very crusty, required constant servicing and increasing journey length to work meant it was time to get a newer car. I just about managed to keep it road worth as a 2nd car for a bit but it was deteriorating and as a young man, finances meant it was time to put it out of it misery

But then I found a pal had a bit of space undercover. And there like super ted, it was left, in a cold dark store room. Spool on 15+ years....

Pal needed his space back and a recovery attempt was mounted. The space had been damp, part of the roof had failed and the poor thing was looking even more unhappy than it was when I put it to bed. But it was still there and hadn’t been crushed into bean cans. It was rescued to my newly purchased house, garaged, covered and left whilst I fixed the house with the intention I would get to work once I got chance...Spool on 5 more years..

I found myself somewhat unoccupied due to a global pandemic. I pulled off the dust sheet, broke open the tool box, and queued the music.....

There’s a years worth of photos of gaping rust caverns, utterly ruined components and anguish to cover its recovery. It’s nearly done (hahahahhahhahhahahhahhhahahha keep telling yourself that fink

) there some things it needs that will probably never be replaced (side trims, removed by previous owner to me, and a drivers seat/cover that is ruined) and it really really needs paint. But it’s completely solid now, the electrics all work, the engine starts ok (aside from petrol and a regap/free off of the rusty points it started after 20 years with nary a problem!) and valve stems are on the to do list. Finally it needs some new tyres (which now appear to be tricky to get hold of!?) but other than that (and looking like a tatty ratbag) I think Mr MoT man can have his wicked way with it.

So, erm, hi. Sorry it took me a while to get her here. I didn’t mean to put it away for so long but she was resting.

Sounds like a great project - would love to see some pictures if you have any??
A wise man once said... "you can never have too many capris - buy another"

Hundreds. Mostly with it in ruins.

Excellent story, welcome aboard & good luck with the old girl

They're the best kind!

Evergreen tyres still make/supply them at the orginal size if that's what you are wanting. I've used them for years on my Capri, they seem excellent, I think most tyre places can get hold of them or you can most likely buy yourself too.
Top

There are others, Uniroyal`s the only big brand still making them (for £50 anyway) free postage
https://www.mytyres.co.uk/cgi-bin/rshop ... L&weiter=0
Top

It’s the speed rating that’s the problem. I want H rated tyres (or faster). Several manufacturers make T rated which I guess are still made as trailer or caravan tyres but that’s too slow (not that a 1.6 will ever really trouble the upper end of a T rated tyre for long). There are a couple of manufacturers of H but big brand are, as you point out, either a millionty pounds a corner (and I need a full 5 in one go

) or simply not covered anymore. I guess I’ll just have to get some from a company I’m less familiar with (I’m sure the hi fly tyres a couple of sites list will be fine) as I can’t see me testing the dynamic limits in quite the same way as I used to as a younger driver....

In better news all the brand new headlights, bulbs and whatnot was all installed yesterday and everything works lovely. So I will once again be nearly able to see where I’m going once darkness falls.

Just have to convince the MoT tester to point them correctly at test time since everything has been moved about to free it all up and make it work. They will get greasy fingers though...there’s about an inch thick on the threads.....it won’t seize again

[email protected] wrote: ↑Sat Mar 20, 2021 5:08 am Several manufacturers make T rated which I guess are still made as trailer or caravan tyres

Im surprised TBH: when you said trailer, I assumed `T` rating was 80 or something, like remoulds? I`d have thought 118mph was pretty `adequate`?
Fair play to you though!

Evergreen make them also, mine were much cheaper than £50 each, I last bought them a few years ago though, but they still supply them. I got someone who works at a local garage to get them for me.

I think you've got more chance of being shot back to 1985 before you reach 118mph in a Laser particularly a 1.6

You must be planning some serious upgrades to be getting close to that??
I've thrown plenty of upgrades at mine and dont think its managed to get over 110
A wise man once said... "you can never have too many capris - buy another"

You never know with a sturdy tailwind...

I’m not overly concerned that the tyres will fling themselves to pieces, but it was hatched with H rated 185, 70, 13’s and if that’s what uncle Henry said it should have, then that’s mostly what I’d like to it have. Who am I to argue with uncle Henry?

Rest of the front end grilles, bumper and indicators went on today and it looks like a Capri again. Just the rest of the lights and bumpers and a quick squirt of paint from a rattle can to keep the new metal from deciding the old steel had the right idea and the orange powdery Swiss cheese look is where it’s at. Then hopefully the outsidey stuff is done.

If I can transfer some photos from the phone I’ll upload and show you some of the horrors I discovered during my year of fun....
Top 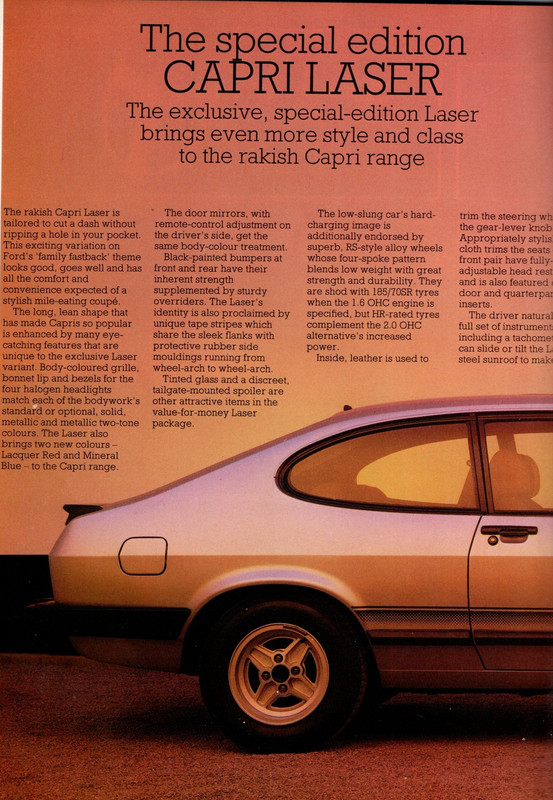 Thanks for that, very interesting. Certainly in all the years I’ve known the car (including previous owners) it has had the faster rated tyres (currently on some goodyears which are perished to death) and every tyre site I plug the reg into it spits out a H rated tyre before happily telling me they don’t have any. Perhaps I can get away with a lower speed after all, opens up more options if nothing else!

I think claiming the alloy wheels were light in the brochure was somewhat tongue in cheek, I have an old steel wheel of the same size and it feels about the same to me, if anything possibly lighter

how would one upload images to this forum? Hitting stuff with spanners...easy. Working the mysterious inner gubbins of the t'internet forum notice boards....wellllllll

It's always good to hear of a Capri making a comeback!


[email protected] wrote: ↑Sun Mar 21, 2021 7:57 am how would one upload images to this forum? Hitting stuff with spanners...easy. Working the mysterious inner gubbins of the t'internet forum notice boards....wellllllll

If they are small (ish) files, they can be uploaded directly to the forum. Click on the attachments tab at the bottom of the page, then click on add files. 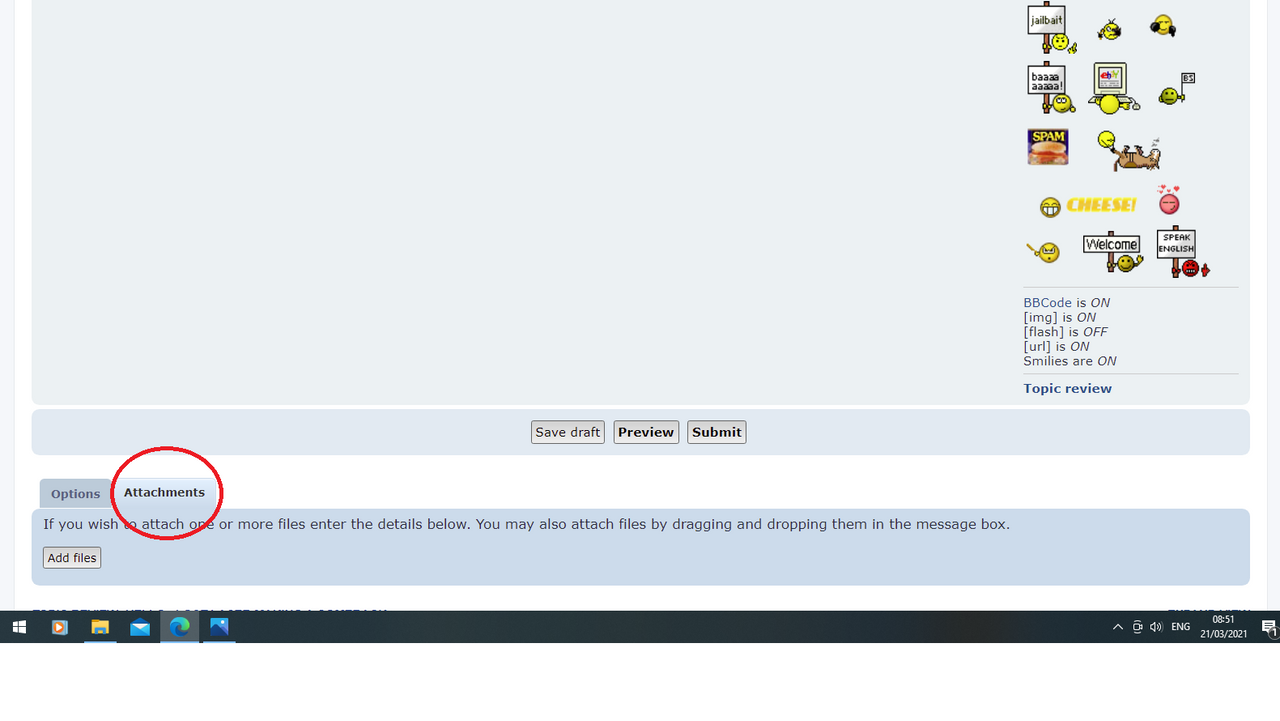 For larger files, you'll have to upload them to a photo hosting website first, then paste the link to the image into your post. Postimages.org is easy to use.

Yes, postimges is really easy to use.


[email protected] wrote: ↑Sun Mar 21, 2021 6:59 am very tyre site I plug the reg into it spits out a H rated tyre before happily telling me they don’t have any. Perhaps I can get away with a lower speed after all, opens up more options if nothing else!

I checked my original fitment Goodyear Grand Prix S (it was the unused spare when I changed all 5 so I kept it) and it is SR, so only 112, if that reassures you further.
I was looking at some archived stuff and I found a screenshot from decades ago when I muswt have been researching prices (I say decades because of the prices - Pirelli £35?) and all the ones that came up were T rated, certainly the Contis I got were. Only thinking that, as you say, it would give you more options. Goodyear, Michelin, Pirelli - those were the days! 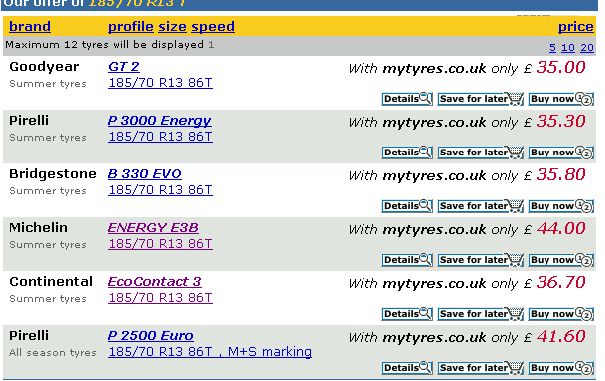 Welcome [email protected] having read this I am really looking forward to seeing this. I love pic heavy threads. I also love the fact that the car has stayed with you over the years. Great to see another car making it's way back onto the road.

One day she will be back in that field!!
Top

ok I shall try a resized small one just to get started. This is 11 months ago. It had stood 15 yrs in storage and another few covered in the garage at this point and is in a shocking state compared to how it looked when I put it away

. Brakes were completely seized on and I couldn't move it or get round it to free them off (problematic!) Fortunately the Audi A8 has a rather powerful engine and despite all 4 wheels not actually rotating on the Capri it pulled it from its hidey hole without me really being able to tell it was attached

The wings are obviously gonners and the valance might need a little work... easy fix...right? right? I mean....I've taxed worse!

Another option, and the one I prefer personally, to add pics -

1. Go to https://postimages.org/ (you do not have to be a member or login)
2. Click Choose Images
3. Browse to the pic you wish to use and double click it (or click once and click Open)
4. Copy the Direct Link in the list (i.e. click the symbol on the right or highlight it and press Control-c)
5. Open up a new message window on here (as if to type your reply/new message, or whatever, as you normally would)
6. Type your message and when done click the Img button and then press Control-v (this will paste the link you previously copied in step 4)
7. Press Preview to see how it will look or Submit, and you're done.
Top
Post Reply
52 posts