I have them, with new fittings.

That's cool but at £60 I might be reaching for the satin black paint!

I've been quoted £75 each to strip and powder coat the bumpers by a local firm. Don't know if this is a good deal or not, any opinions?

Think I need to sort out the front bonnet edge before i do all these other bits as that's the thing really letting the car down at the moment.

Noel wrote:I've been quoted £75 each to strip and powder coat the bumpers by a local firm. Don't know if this is a good deal or not

Hi Noel,
I've had a few bits and bobs powder coated, and I would have thought the cost you've been quoted is about right. Be aware though that powder coating won't cover up any imperfections if the surface is pitted, or whatever.
Another option is to buy repro replacements, although personally, I'd stick with the originals if they are in reasonable condition.

Thank you.
The back bumper is original and free of dents. It's just the paint job I did on it is flaking off now and it needs refreshing.
The front is a pattern part and has a couple of weird bits, but these are thankfully covered by the overriders! Again this one is OK but the thin paint they chuck on these is flaking at the edges big time.
Top

Noel wrote:Thank you.
The back bumper is original and free of dents. It's just the paint job I did on it is flaking off now and it needs refreshing.
The front is a pattern part and has a couple of weird bits, but these are thankfully covered by the overriders! Again this one is OK but the thin paint they chuck on these is flaking at the edges big time.

At £75 each to powdercoat the bumpers, you can buy brand new reproduction ones for less! (think they are around £60 a pop)

Again, if you dont mind putting in a bit of extra time yourself you can save a fortune just simply sanding down what you already have and using some decent primer and black paint in rattle cants and that will do the trick.

Thats what i did to my bumpers (also repro's), and they look near perfect: (granted this picture was taken just after she I finished her second mild restoration a few months ago but they have held up perfectly since)

You'll have to sand things down in multiple stages with both dry and wet sand paper of various grades, but its gotta be worth it when you can save £150?
Top

You're right, its tempting to do it myself.
Then I put that £150 towards re-furbing the alloys, which is something that is much better when done professionally.
Top

Noel wrote:You're right, its tempting to do it myself.
Then I put that £150 towards re-furbing the alloys, which is something that is much better when done professionally.

Exactly, and definitely a much more vital part of the cars' looks. Then again, even those you can do yourself, i refurbed my own 4 spokes but i cant recommend it as its a real pain in the bum but i had no choice as i couldn't afford to have someone do them for me so thats a different situation.
Top

Here's another bit of the car to look at: 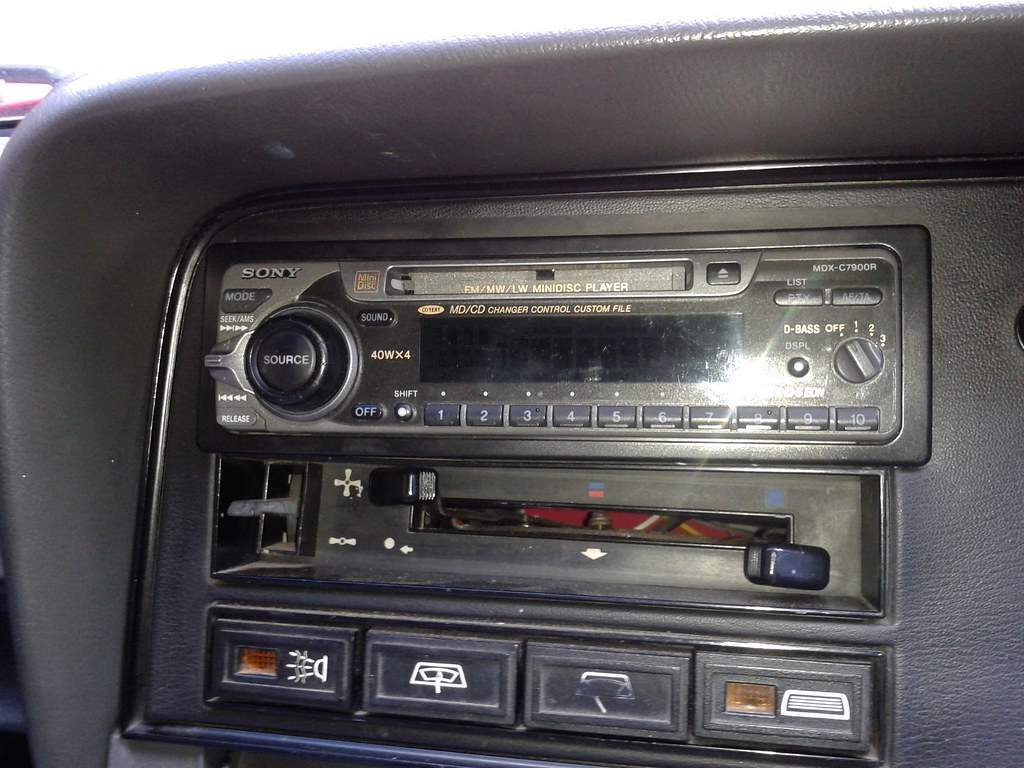 MINIDISC!!
When I bought it the dash had already been hacked about (carefully though it was) to install a DIN sized Pioneer head unit, but this lasted about 6 months before the tape deck packed in.
So, thinking I would treat myself to The Latest Thing, I installed a minidisc player. I went down the Tottenham Court Road in London and got myself this Sony head unit, and another hi-fi sized recorder (so I would be able to get m'self something to play on it!!) and whacked it all in.

and how long did minidisc last for eh?


The only good news is I think its got a line-in somewhere as it could drive a CD changer, so I can adapt it to play stuff straight off the phone.
Top

Minidiscs were far superior to CDs.. hardier, much better sound quality.. A wonder they didn't catch on.
I'm the one that leaves all those shoes in the carriageway.
Top

Weren't mini-discs more expensive? That would be your answer right there.
Top

They were more expensive, but at the time were the only alternative to tapes if you wanted something easily portable and recordable.
Home-burnable CDs at an affordable price were still a few years off.
ipod type things were some way off too.

Nice thing about MDs was that there were small, I must have about 20 or so stashed in the centre console. Good use of space.
Top

Oh yeah, I forgot about that, they were re-writable too!
I'm the one that leaves all those shoes in the carriageway.
Top

You couldn't really buy albums on Minidisc though could you. I always thought that as being part of their lack of success.
Top

I suppose its an example of something better coming along, but the cost to change everything over to that format put a lot3 of companies off.

Was it same with Betamax? That was better quality than VHS... and another Sony product!!
I'm the one that leaves all those shoes in the carriageway.
Top

There was a brief period when record shops like Our Price would have minidiscs on the rack, but I don't remember there being that many albums available. An Elton John one, er something else. Hmm, not many were there? Can't remember any much!

I remember a few people with minidisc walkmen which were really good things to use, much better than tape or CD walkmans.
And it was chuntering along nicely as a format, but what really killed it was cheaper in-car CD players, then recordable CD, and finally mp3 / ipods / hard disc players etc..
Top

Also, I think that marketing has a lot to do with it, as well as that 'must have it' factor, that you really can't explain. I suppose those two things go hand in hand.

Some things simply just have that inexplicable appeal to the masses, and some don't. You either want it or you don't, and with Minidisc and Betamax, they didn't.
Top

Was talking at the weekend, with a friend of mine who looked at the head unit, and said the following:
"Wow that's exactly the same as I fitted to my Elan!!! Always thought I was the only one!".

So they sold at least two!

On to more interesting car stuff.
When looking at things on my car that I have modified (which isn't actually much), I remembered this: 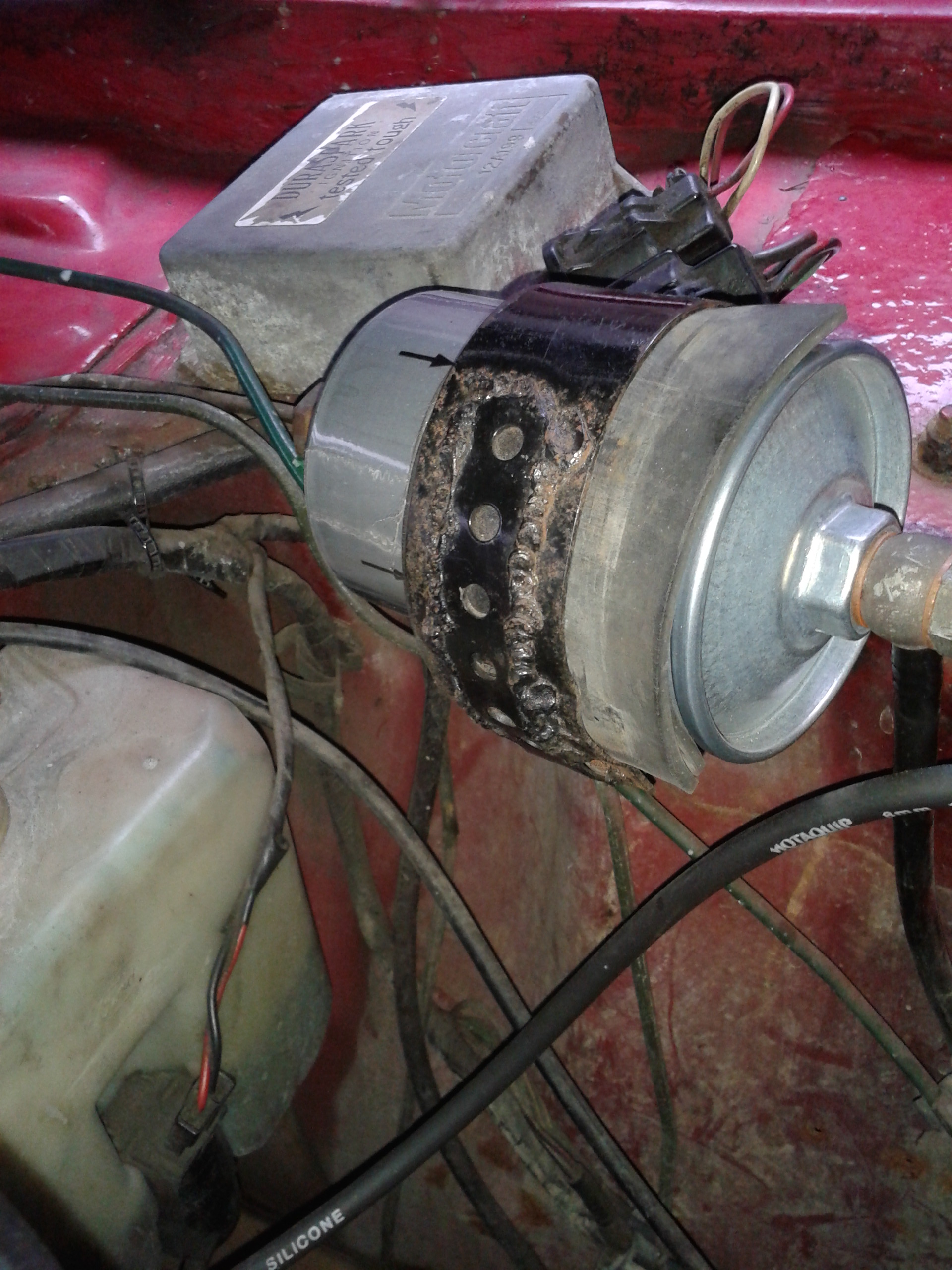 There was a time when a lot of parts suppliers (like Halfords), listed the Capri 2.8i fuel filter as being a large pint glass sized thing rather than the normal small one. These were/are compatible, but don't fit in the bracket.

They seemed to be so prevalent at one point (and cheap) I thought "sod it I might as well modify the bracket", so I did - with a bit of meccano, some amateurish welding, and a light mist of black spray paint. Thing is I could never get it to close up nicely and grip it, so I packed it out with a bit of rubber. Isn't it great?!

I think Martin capri gear does powder coat brackets doesn't he? Might have to treat the car....
Top

Noel wrote:I think Martin capri gear does powder coat brackets doesn't he? Might have to treat the car....

Hi Noel,
Yes he does, and very nice they are too.
No disrespect intended towards the quality of your workmanship, but I think a new bracket would drastically improve the look of your underbonnet area....

I have the correct bracket.

20th July marks 20 years since I bought my car, so it's having an anniversary treat: 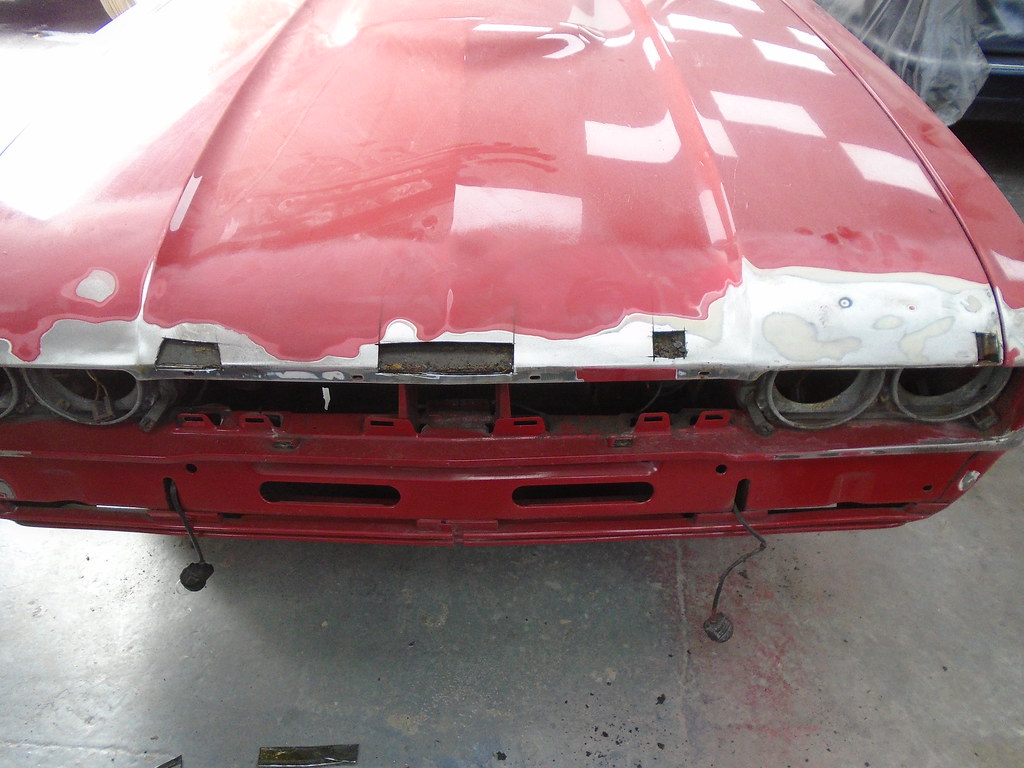 Lot more behind those rust blisters than you first think!!
(this is not my work by the way)
Top
Post Reply
46 posts