, so I thought I would celebrate by putting up a picture and giving it a thread. 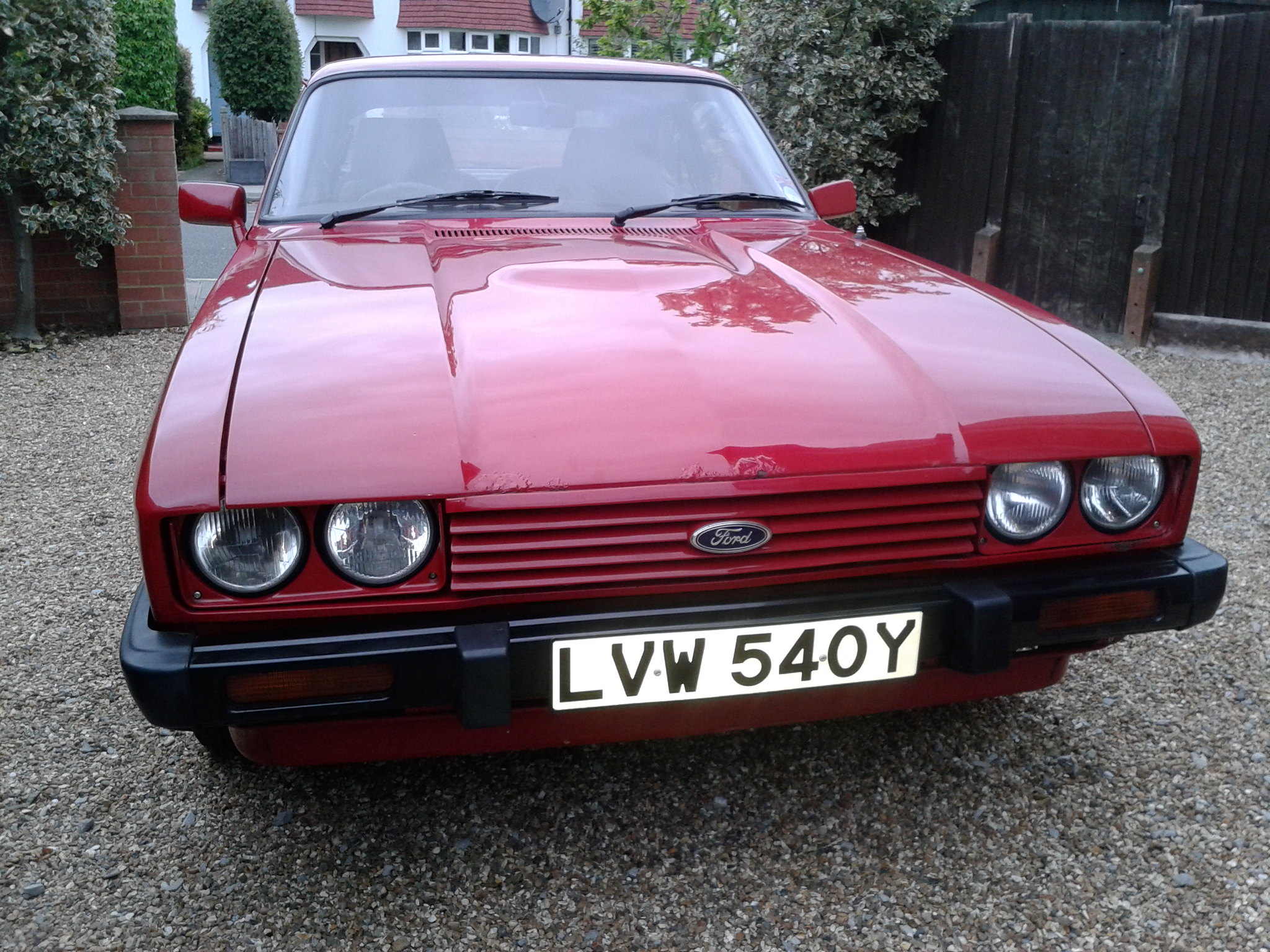 It's an early five speed 2.8i first registered June 1983. Cardinal red, shark grey interior.
I bought "her" (if you like) in July 1997 for £800 when Capris were firmly in "niche" or banger territory.
So far it's the best £800 I've ever spent.
I had her resprayed and all the rust cut out in the couple of years after I bought her, but as you can see it's all coming back, but frankly not that bad. I had also replaced all the springs with new, new Bilsteins all round, and polybushed it.
In the years from 1999 to about 2005 she was my only car and was used in all weathers as a semi-daily drive.
Then latterly she spent a lot of time in the garage doing very little to the extent that the last 5 years have been completely dormant, UNTIL NOW!!!

Anyway! Next job now we are road worthy is sorting out the bonnet front edge and that rust blister under the headlight.
Then I'm going to treat it to fresh tyres and a wheel refurb, powdercoating of the bumpers, and finally will install the drivers seat I bought off turbo_mike.

It's really great to have her back on the road for the summer, and best of all the kids think its fantastic.

One question I've got, is that as an early 5 speed should it really have a red grille and headlight surrounds?
It's always been like that, but I suspect someone has colour-coded these back in the day to refresh it once the Special came out.. what do people think? I might change it back to black - am having a bit of an originality-fest at the moment.

I remember when Ford started painting the grills to match the car. At the time I just thought it was a way of trying to make the car look more like the coloured plastic bumpered stuff it was competing with and thought black looked better. I still prefer black 30 years later.
My 2.0 should have had a coloured grille and it was obviously painted black before I got hold of the car and I've kept to black. Just depends what you prefer really. Originality doesn't unduly bother me.

What a great car and a terrific story.

I dont think its technically supposed to have the colour coded grille and headlight surrounds, and if it were mine i'd take them back to black as i just think that looks superior, but its up to you.

Great news on the MOT, the car looks great

Grille and headlight surrounds should be black, but it looks fine as it is......
Maybe get a spare set in black so you can swap over when you want a change

Hi Noel,
Very nice car indeed! As the others have said, the pre-special 2.8s had black grilles and headlight surrounds. Personally, I'd change them back to how they were.

Good looking car, it's great that you've got all that history with it. Time to enjoy it again now after that lay up, have fun

Thank you for the kind comments.

I have a spare set of headlight surrounds and a grille all in black. I have misplaced the grille though, so when I find it I will put them all on and see how it looks. Only thing is the plastic trim on the front of the bonnet also has to go back to black too doesn't it, which is a bit more of a faff.

She's a good looking car from a few yards off but no longer stands up to close scrutiny what with the rusty bits coming back, but who cares!! There's no side stripes either, I never put them back after it's original 90s respray cos I thought the injection logos looked naff. Still think it's better stripeless but I might put them back. Thinking about it.
Top

Here's a picture just after the original do-up and re-spray, taken about August 2000. 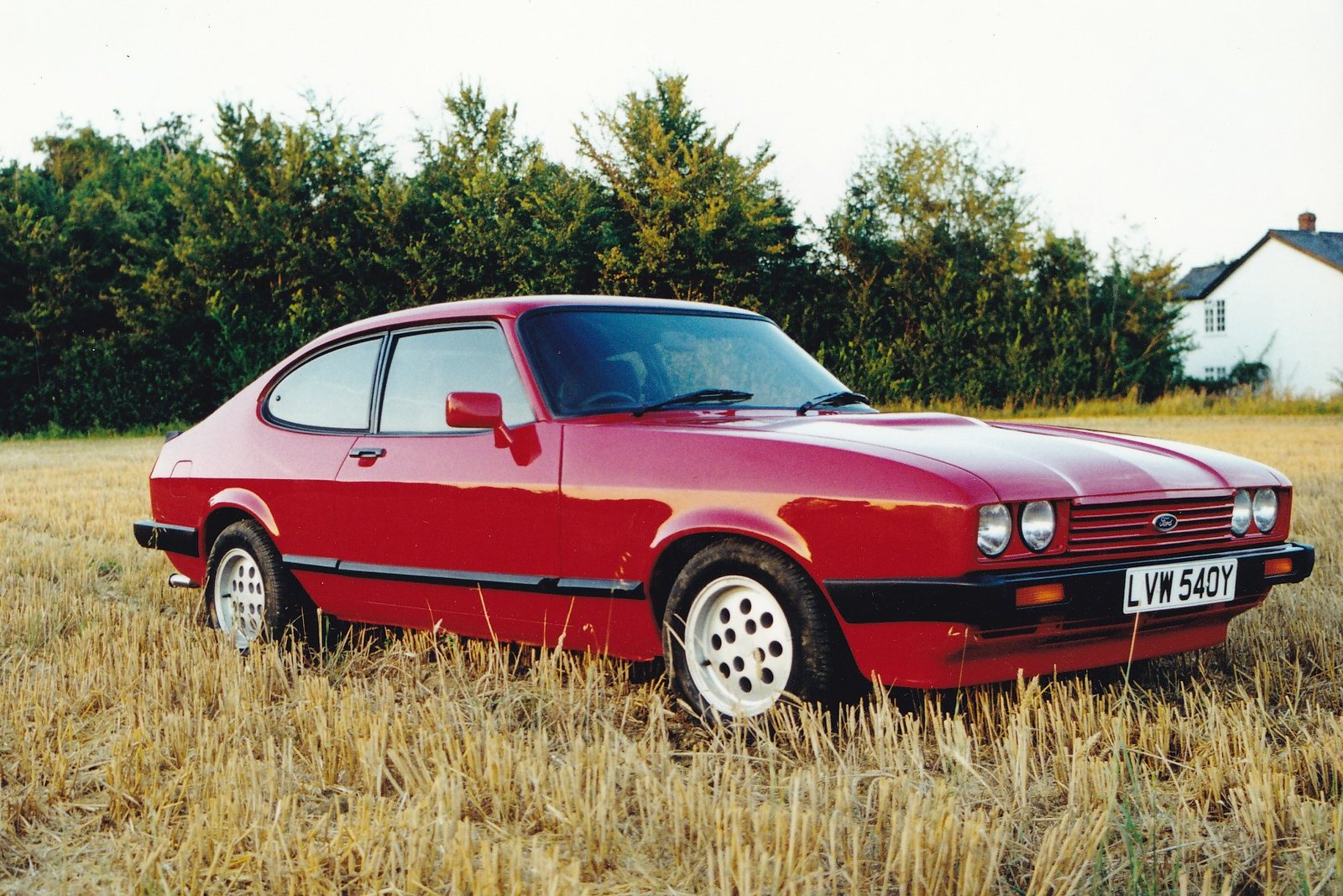 I was always particularly pleased with the wheels as I did them at home with a rotary wire brush, a few cans of Halfords silver paint and some lacquer. They looked spot on for years. In fact two of them are still passable even now.
Top

Quite fun going through old pictures, here we are in May '98 in original as-bought condition before I'd really done much with it (or her): 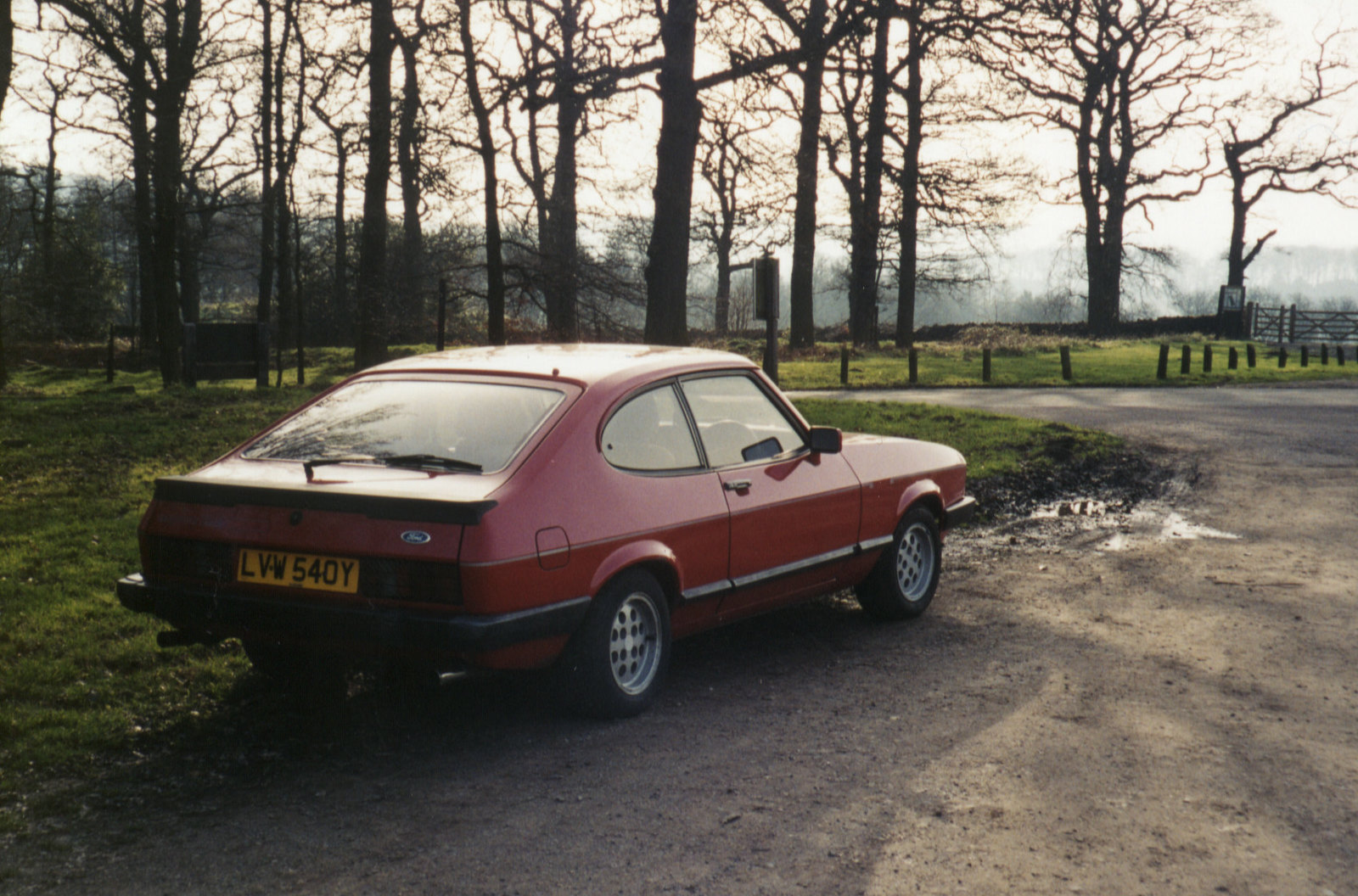 You can see the rear light lenses are tinted, they'd been sprayed with some sort of grey varnish to make them look all "colour coded" which would have worked on a grey or black car, but seemed a bit pointless when the lens colour already matched the paint!
Top

All these 80s/90s mods are quite tasteful when compared with today's neon lights, endless LEDs, camber angles and stretched tyres!
Top

I used to change stuff on my cars, but I'm all for standard now, maybe a stainless exhaust but that's it. Funny how you come full circle

The Bonnet lip is just 4 Nuts inside the edge, the Bolts slide along the groove for position. I've just changed mine to all Black front from colour coded and I'm so happy I did, but as you, I have kept the original colour coded Lip, Grill and Bezles so I can change it all back in approx 5 Mins on a whim!!! But definitely worth changing the Lip as well, or remove it to paint it....

Now for the Kinky stuff!!! Don't laugh yet!!!! To blacken your Rear Lights, we used to nick a pair of tights, heavy Denier for a darker affect, drop off the Lens, wrap it in the off cut of her best tights and quickly squash it back on to hold them taught!!! (You can use the screws or a little bit of tape to hold it taught while you 'Squash' it on!!!) Hey Presto, darkened rear lights and you could go really dark or lighter!!! But you could always just get rid of this when you wanted to, with out going to the expense of having to pickup a couple of lenses off the Scrap yard floor and hide them in your Tool Box!!!

Oh those where the days!!!! Cheers,

Ah just 4 nuts... only problemo is I don't have a spare bonnet lip.... can you chemically strip paint off plastic parts without trashing the plastic?
Top

Noel wrote:Ah just 4 nuts... only problemo is I don't have a spare bonnet lip.... can you chemically strip paint off plastic parts without trashing the plastic?

Why not just use sandpaper? Personally I wouldn't worry about chemically stripping?
A wise man once said... "you can never have too many capris - buy another"

Don't worry about stripping the paint, it's not necessary (as long as the existing paint isn't peeling or cracking). Just sand it down with some wet and dry, make sure all the dirt and other contaminants are removed, clean it thoroughly then prime it with some good quality plastic primer then paint with satin black paint. Easy.
Top

Thanks for the suggestions re preparing the bonnet edge trim.
I was thinking in my head that I could magically strip it back to original bare plastic and leave it at that, but that is probably wishful thinking.

The whole idea of returning the front end plastic to un-painted isn't going to happen until I find my black grille anyway!
Top