A few pictures of my mk3 1.6 (only to the insurance company) laser. started of very original.

since i got hold of it its now up to 93k miles. its also had material recaro's fitted, which have since been replaced again with half leathers. the spoiler has been replaced with fibreglass turbotail that i had to repair due to transport damages in delivery.
the engine has been replaced with a 2.1 200 block with fast road cam, put some bike carbs on it which need setting up properly. changed the dash fascia to have carbon fibre look front and chrome rings which looked great when first done. fitted cd player in glove box. replaced ripped sunroof lining.

i also have in store for it, to set up the carbs, fit catch tank as oil forms around breather, fit 7j minilites, the front wings will need replacing as they are rusting around scuttle area, the rear wings also will need doing, the exhaust blows around the joint under in the middle of car under the doors so its quite smelly with windows open (i have basic stainless one to fit).

pretty good car and not too bad on petrol when driven sensibly.

anyone want to value it for me?
Top

As it sits IMO ONLY you should walk away with at least £1500
But personally £2000 would be more like it If you completed
That is the least I'd expect.
Insurance wise Add up what It owes you and add some more on top
example if it owes you £2000 insure it for £2700.

That is just my view and that alone.
Top

Hi all, just thought I'd send an update of my car for how isn't on the other forum. Now running a Nissan ca18det turbo engine with approx 220-240bhp (not dyno'd) with an x pack and 15x8 wheels. Mondeo front and Sierra rear brake kit. Enjoy. 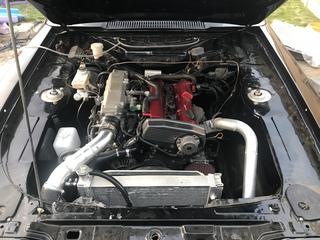 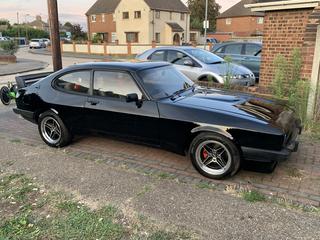 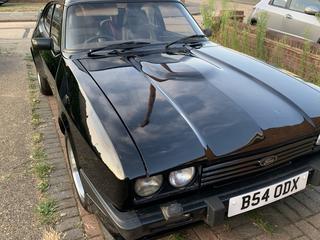 Need to remind myself how to get photos on the page and not the links I copy and pasted.
Top

Looks lovely - the big wheels and big turbo-tail really suit it imo and I bet that thing flies!!

No Dan, you can't

Sure does, with any luck it'll make it to Brooklands.
Top

For anyone that missed it:

My car was stolen on Friday. Keep your eyes peeled for it.
Top

My car was stolen on Friday. Keep your eyes peeled for it.

Sorry to hear some scumbags have done this

Will keep an eye open for it and hopefully you get it back soon.

Is this the one with the video clip of a van trailering it away?

Sorry to hear your car has been taken mate, absolute nightmare scenario for any of us and especially with the work you’ve put into it.

Hope the Police are being helpful with this - I did share some of the posts on Facebook if this is the car I’m thinking of.
Top

Thanks Hampshire year that's the one. Been searching eBay etc for the last few days now. It's already been 5 days!! It's been passed to Essex police but nobody from there has contacted me yet. Will call them myself tomorrow.
Top

Gumtree is a good one to watch as well I always find slightly dodgy looking sales ads end up there too, for whatever reason.

Also knocking the doors of the roads nearby to where it was stolen from to see if anyone has any Ring Camera footage or may have been driving home at the time with a dash cam on.

Plus posting it in any local community Facebook groups
for whatever town you’re based in asking people to check any camera footage they may have from that day.

I always hear the Police can be a bit hit and miss with car thefts in terms of how throughly they actually investigate it, but I hope they take it serious for you.

It helps in a way that you’ve added the X pack, new engine etc as your Capri is very distinguishable so much harder for whoever took it to just shove some fake plates on it and re sell it.
Top

I did see that your car had been taken on Facebook as your not that far from me just over the water , it’s a car that stands out so fingers crossed will make it harder for the scambags to move on
Ford Capri 2.0 Laser 1987 Mercury Grey .......

mgentry90 wrote: ↑Wed Sep 15, 2021 5:04 pm Thanks Hampshire year that's the one. Been searching eBay etc for the last few days now. It's already been 5 days!! It's been passed to Essex police but nobody from there has contacted me yet. Will call them myself tomorrow.

Any updates on your stolen capri mate?
Top

No updates. No news or sod all. Not found any parts yet for sale and I'd know if I saw any of them as everything has a distinguishable mark on them that I'd recognise (seeing as none of them were new parts, you remember that scabs and scars)
Top
Post Reply
17 posts • Page 1 of 1