Problems with my alternator charge system!

Problems with my alternator charge system!

Hello from Spain everybody! I have electrical problems on my 1981 2.0S , There is something wrong on the charge system of the battery and alternator, the light of alternator in the console is always on, this is a new alternator, i bought other one thinking it doesn't works but the problem is not on the alternator , the problem is that the alternator doesn't receive the 12v voltage from the excitation wire,with the contact on i get 2.75v from the blue wire ( the alternator excitation ) , and doesnt start to work, if i put a direct wire from the battery + connection , it gets excited and in this momment if starts to work and charge the battery ) the light of the console turns off in this moment ) but the belt of the alternator starts making a big friction noise, it seems that any magnetic force inside the alternator try to stop it! and makes lot of noise! idea of how i can fix it? Anybody has the electrical wiring diagram from the 2.0S ? thanks a lot!!

VISONTE wrote: ↑
Thu Oct 15, 2020 10:29 am
) but the belt of the alternator starts making a big friction noise, it seems that any magnetic force inside the alternator try to stop it! and makes lot of noise! idea of how i can fix it? Anybody has the electrical wiring diagram from the 2.0S ? thanks a lot!!

Hola!
The belt noise sounds normal, as the alternator is suddenly putting a lot of charge back into the battery (after it`s used hundreds of amps to start the engine) the electrical energy it`s putting back into the battery will result in the altrernator itself demanding more mechanical energy (ie requiring more `work` to turn it) thus becoming harder to turn so the belt squeals. This sounds normal.
Most alternators WILL self-excite anyway once they reach a certain speed, 2k or so, as the residual magnetism will induce sufficient current in the field coils. I mistakenly put an LED in my Ignition lamp, so there`s not enough current to excite the Alternator, but as soon as it reaches 2k it switches and stays on as normal, (incl tickover) so I`ve just left it. Will yours not self-excite if you actually run it?
I can only assume there must be some kind of fault between the Ign lamp and the wire into the alternator, as the lamp is lighting: With a digital meter (10Mohm/V) you should get full 12v on the earthy side of the bulb, 2.75v is odd. Normall it simply earths through the alternator coils, hence it`s extinguished when they go positive.
edit: any idea why the 2 thick leads from the plug have been chopped &b soldered onto a single lead: where has the other thick red lead gone to? It`s always a problem when people have been chopping up the original loom, (a previous owner obviously - not pointing the finger

Are you aware that Capris were produced with three different types of alternator?
I didn't until I started to look into your problem!

They had either, Bosch, Lucas or Femsa alternators and the big difference is that, the Lucas has an integral voltage regulator whereas both the Bosch & Femsa have a separate regulator mounted in the engine compartment.
Now, judging from your photos your alternator doesn't look like any of the above and as it appears someone has bodged your loom at the alternator connection: could it be that here lies your problem?

I'm no auto electrician but I've a feeling the wiring adaptation you have is trying to turn the alternator into a starter motor which would then fight the engine.
What I have however heard is, that on start up of a 600MW steam turbine, when it came to exciting the generator this was done with the shaft in the wrong position creating a 110 ton starter motor. Apparently a section of the power station roof went with it.

The moral of the story: before the next test it might be useful to remove the bonnet.

STEVEW wrote: ↑
Fri Oct 23, 2020 5:24 pm
he Lucas has an integral voltage regulator whereas both the Bosch & Femsa have a separate regulator mounted in the engine compartment.

Not sure of the make of alternator in OP`s car, but the Bosch one certainly has an integral regulator, combined with brush box, highlighted in pic. TBH, I thought external regulators went out with dynamos?
I agree the butchered wiring will be at the root of it all, but 99% certain that whilst a dynamo IS basically the same as a motor, an alternator is an entirely different device (no commutator, full wave) 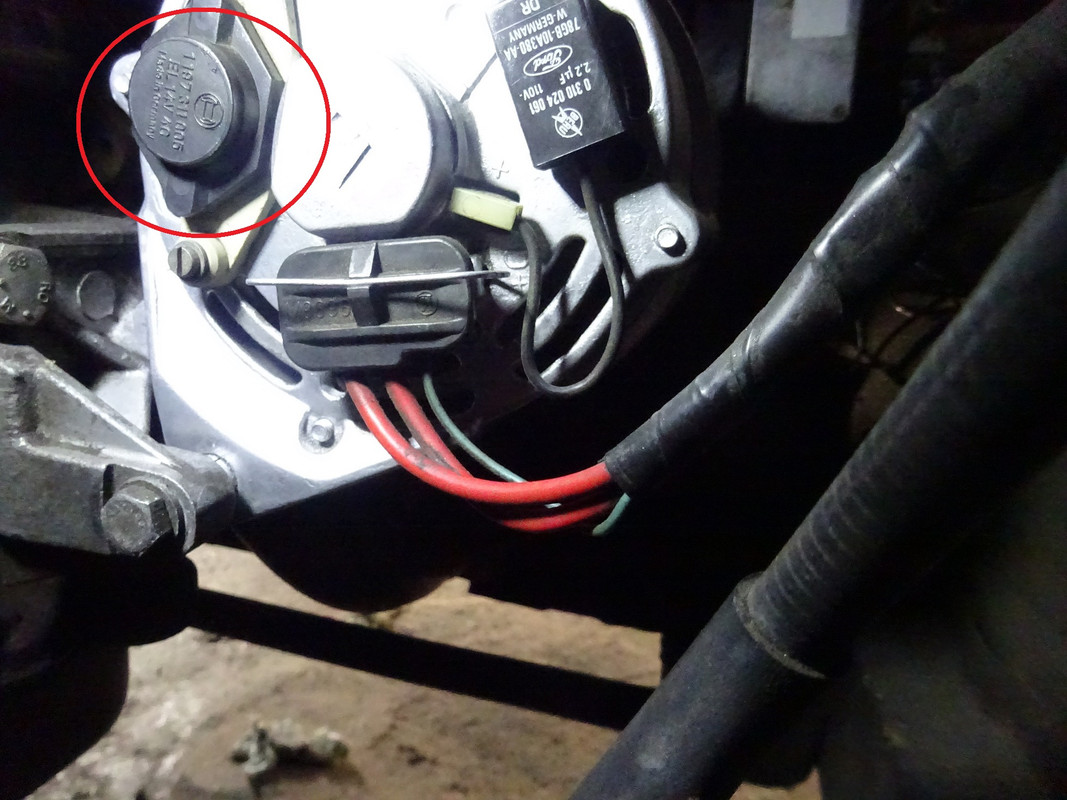 Hi Steve,
Thanks for the info


stevemarl wrote;
Not sure of the make of alternator in OP`s car, but the Bosch one certainly has an integral regulator, combined with brush box, highlighted in pic. TBH, I thought external regulators went out with dynamos?

The info in my previous post came from the reprint of the official Ford manuals, which also show the three different makes of alternators from the rear.
After reading your reply I checked the issue date of the pages, which are May 1974. I then looked at the alternator on my son's car and this has an alternator similar to the one in your picture with a voltage regulator attached on its rear housing. This car was built in 1982/83.
I assume that Ford started to use a different type of alternator between the 70s and 80s.

I agree the butchered wiring will be at the root of it all, but...

Exactly, that's why one of the first things I checked when we bought our Capri was the wiring system. If it had had dodgy looking wiring I would have walked away. It's not worth the hassle.

As for the rest of my post, although the power station story is based on fact, it is meant as a tongue in cheek anecdote of what can happen when you get the electrics wrong.

Steve,
I do appreciate it was tongue in cheek, I wasn`t being critical, I just didn`t want someone looking for an external regulator - they`ve got enough problems

Edit: out of curiosity I looked in my original WS manual and it does indeed say `fitted with generator or optional alternator` so I assume that it must have changed over `74 ish when the MkII was launched? I`ve mainly used the Haynes for MkII onwards, which only shows the later integral regulators on all makes.
Top

I dunno that the wiring has been butchered , just because the two parralell outputs are joined . Sometimes this is done because one push on spade connector ( what are inside the plug ) is not capable of handling 40 plus amps reliably so they double up the out put terminals. I think the excitation wire is ( partly?)shorted to earth between the alt bulb and the alternator.

Does the alt bulb glow if you remove plug from alt and switch on ign ?
Also , you should not see battery voltage at the blue wire as this feed passes thru the alt bulb and there will be a voltage drop there. One theory I have heard before is that the wattage ( hence the resistance ) of the bulb will dictate the excitation voltage ( this is true ) ,the theory being that a low wattage bulb will be higher resistance than a high wattage bulb and that high resistance may knock off enough voltage to make excitation a bit unreliable (remembering the bulb is in series in the power supply to the excitation ).....this certainly turned out to be true when I rewired my 1974 Moto Guzzi

Yep, I agree, that seems most likely.
Top

Mc Tool wrote: ↑
Sun Oct 25, 2020 6:24 pm
you should not see battery voltage at the blue wire as this feed passes thru the alt bulb and there will be a voltage drop there.

Hamish, I assumed it was tested with a meter and the lead disconnected, in which case the meter would show full battery V, You`ve got a potential divider, V is split in the ratio 6/1,000,000 (bulb/meter), therefore effectively ALL the V will be across the meter. Having re-read, yep it`s still connected to the alt so it`s anyone`s guess. As you say, some kind of short?
Will we ever know? Probably not.
Top
Post Reply
9 posts • Page 1 of 1