my head lights seam really dull I've seen briter candals is there anything briter I can use or can I get HDMI kit to fit? thanks for any help
Top

chris_v888 wrote:my head lights seam really dull I've seen briter candals is there anything briter I can use or can I get HDMI kit to fit? thanks for any help

Hi Chris,
You can't fit an hid headlight conversion kit now as it's against the law.
A better option would be to use Osram Nightbreaker bulbs, people who have done this say they make a difference.

What about fitting some e30 projectors and updated bulbs
Top

I wouldnt go for HDMI instead of your Capri headlamps. Even very bright TV screens with high definition content wouldnt be as bright as proper headlamps and it could be a bugger to find nice round ones that would fit in the surrounds.

I've just bought and fitted these bulbs - make a surprising difference and I was pretty impressed! 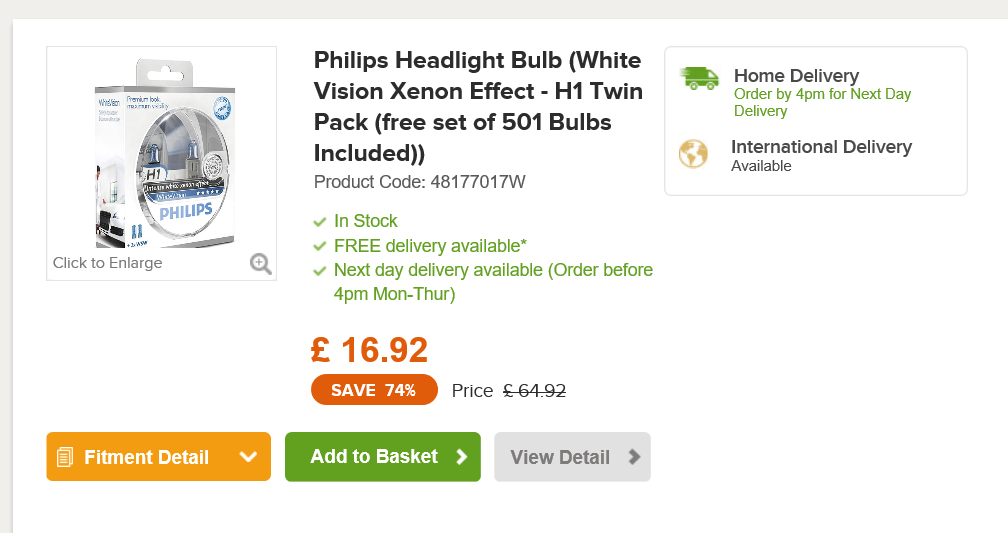 D366Y wrote:I've just bought and fitted these bulbs - make a surprising difference and I was pretty impressed!

Hi Danny,
They look good, and that's a great price. Good old carparts4less!
Did you use the standard bulbs or change to Osram Nightbreakers?

Andrew 2.8i wrote: Hi Danny,
They look good, and that's a great price. Good old carparts4less!
Did you use the standard bulbs or change to Osram Nightbreakers?

Can never go wrong with Carparts4less!!
And I just swapped the bulbs - I was hoping to go for a whiter effect on the lights which is another reason I went for these over the nightbreakers as well
A wise man once said... "you can never have too many capris - buy another"

thanks all i did fit hdmi lights sorry for the late reply had bad brake up with my wife .

Oh dear, sorry to hear that. I hope everything works out OK.

na got the car in bit of a sorry state but everyone round hear loves it lol she just left me in some bad debt but thanks all for help once i get sorted ill get round to sorting the littel bits of rust on the arch and bit on the seil? so thanks all,
Top

I just went for these ones and have been really happy with them. I certainly don't struggle at all with night driving and it's something I do frequently. 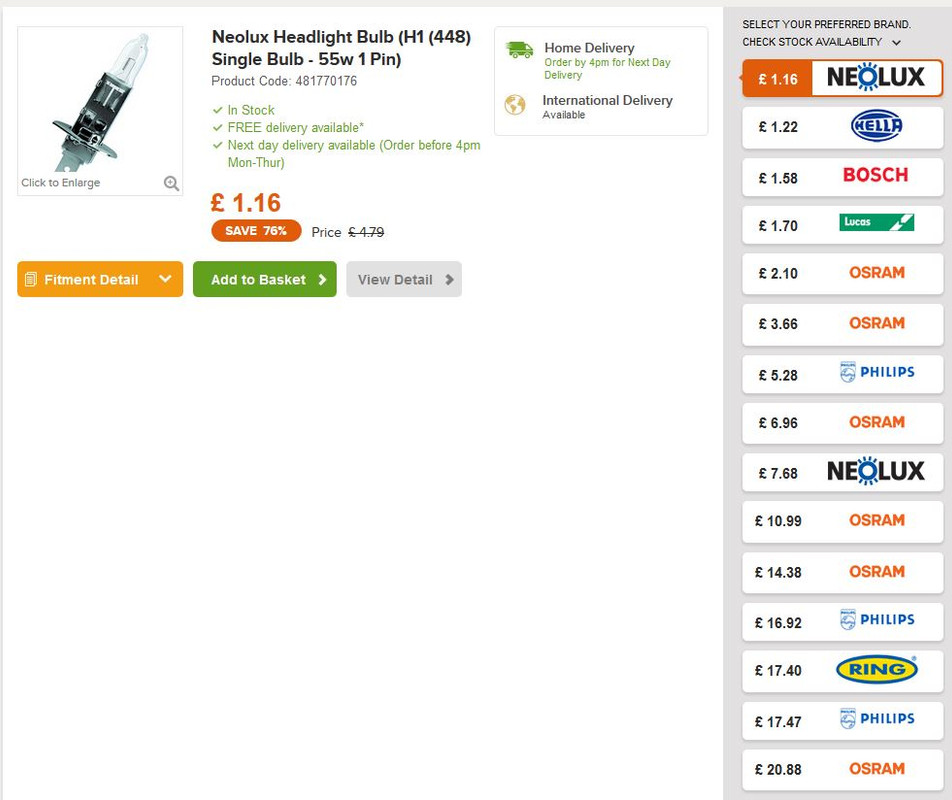 Hi, is there an easy way to get both twin lamps on dip and both twin lamps on full? I never understood why cars have twin lamps and just have a single set on at any one function.
I heard that it can be done with a relay and some extra wiring, and maybe different “dual function “ bulbs, preferably the brightest...I would like to get these parts, any info greatly appreciated...
I intend to ask someone to fit them as I can see a whole weekend wasted and the air turning blue!

The construction and use regulations specify only 2 dipped beams, but up to 6 mains (depending on vehicle width) which is why Jags, Stags, Interceptors and Capris - none of them ever came with 4 dips, but could have all 4 beams on.


If you have H4 outers, https://www.ebay.co.uk/itm/HELLA-1L3002 ... 2749.l2649
it`s quite easy to get all 4 beams on. If you switch to beam, the dipped lamp stays on, so it`s just a matter of fitting a relay so that main beam switches over the supply from the dipped filament to the Beam filament (in the H4 outer bulb). Minimal rewiring, original fuses still protect and it fits neatly between lamps. 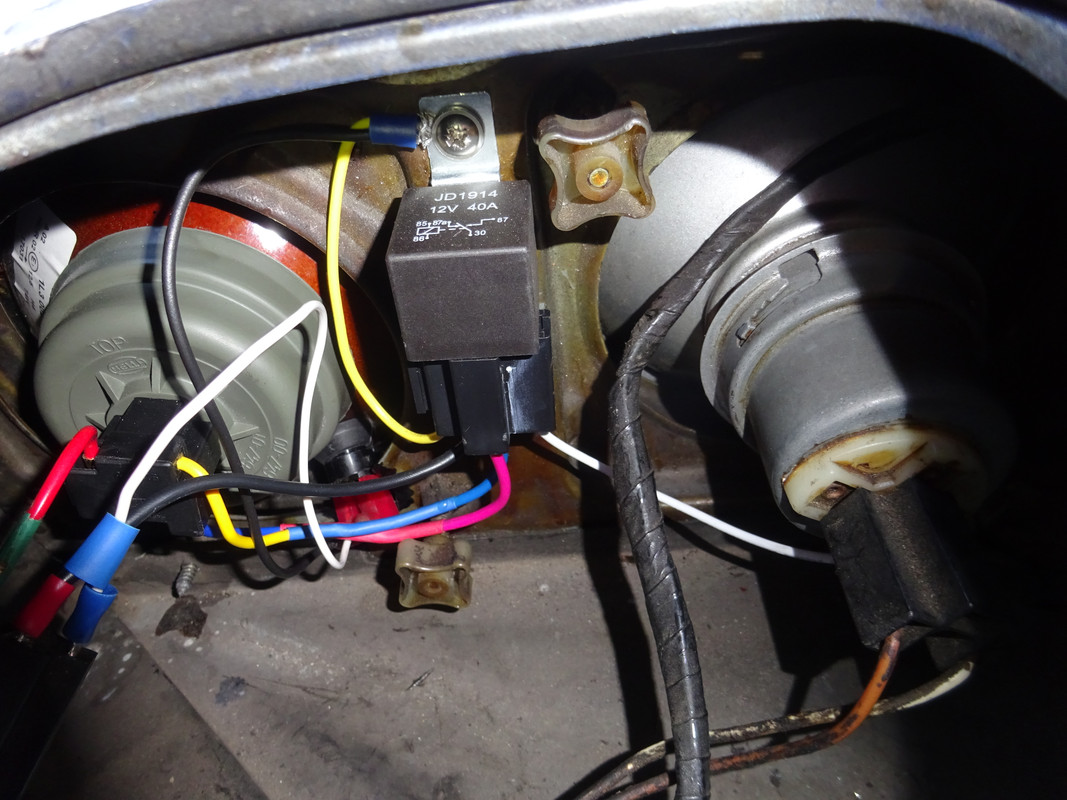 What is the benefit of having 4 main beams? I can see the advantage of 4 dipped beams for enhanced night driving, although illegal, but why 4 mains? Surely on the occasions that a main beam is warranted, the intensity of the original 2 is easily bright enough?
Top

Paul,
it`s not the `visible` extra brightness, it`s the extra distance it throws the light, it really does mean you can see that much further down the road, which if you`re on a fast road in the country at night is really helpful. (I do like the Cat & Fiddle at night

Dipped, on the other hand, however many, however bright, will only ever light so far up the road. Ironically, you know I had LED H4s fitted for a time, the dipped beam was much, much brighter and whiter with those, it really was `night and day` to look at. BUT in reality, could I actually see any better, - no! Because the thing limiting the dipped beams is the fact, however bright they are they cut off so many yards down the road and everything beyond is invisible, so really it lit up things (I could already see perfectly well with normal bulbs) more brightly, but didn`t help me see further ahead which is what I wanted. Hence back on halogens.
I did read some stuff about HID vLED v Halogen (slightly off topic) which found that the HID was much more intense immediately in front of the source but as the distance from source increased the difference became less and less, to the point where XXX metres down the road an object would be illuminated just as well by tungsten. As though the quality of the light was different in some way? It`s an interesting subject, for eg, I read somewhere else that whilst bluish light appears the brightest, the human eye (or brain?) is actually much better at judging distance, space, speed and detail at the yellow end of the spectrum. You`d think the opposite. I know with the LED mains if you got a road sign, the reflected light back was absolutely blinding, the Nightbreakers are just as effective but subjectively much easier to live with.
Just my thoughts, but I paid a fair amount of money for proper Philips LED H4s which are now back in their box.
EDIT: Apologies - I do start to ramble on when I get started, sos!
Top